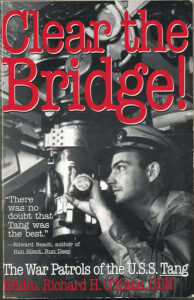 “CLEAR The BRIDGE!” The War Patrols of the USS Tang. By Medal of Honor winner, Rear Admiral Richard H. O’Kane, USN (Ret.). The true story of one of America’s top-scoring World War II submarine’s––USS Tang (SS-306), written by her only skipper, Richard “Dick” O’Kane. Tang averaged one enemy ship sunk every 11 days, a rate twice that of any other U.S. submarine. On lifeguard duty in 1944, O’Kane and his men rescued 22 navy flyers. On her final patrol, Tang was tragically sunk by her own circle-run torpedo––O’Kane was one of the few survivors who became a Japanese POW. In 1987, O’Kane wrote the book “Wahoo.”  Used, 2003 softbound edition, 480 pages with 23 black and white photos, maps, a complete USS Tang crew roster and an index. Difficult to find and no longer in print.

Rear Admiral Richard Hetherington “Dick” O’Kane was born in Dover, New Handshire in February 1911. O’Kane graduated from the U.S. Naval Academy in May 1934 and received submarine instruction in 1938, then assigned to USS Argonaut (SS-166) until 1942. Lieutenant O’Kane joined the pre-commissioning crew of the new submarine USS Wahoo (SS-238) and served as her Executive Officer on five war patrols with Lieutenant Commander Marvin Kennedy and later under legendary Lieutenant Commander Dudley “Mush” Morton. Morton established a record as an excellent tactician, as he preferred to run the demanding analysis and plots while his XO (O’Kane) manned the periscopes, a reversal of standard practices at the time. In July 1943, Lieutenant Commander O’Kane was detached from Wahoo and became the Commanding Officer of the USS Tang (SS-306). Wahoo was lost with all hands in October 1943. In five war patrols, O’Kane and Tang sank 24 Japanese ships totaling over 227,000 tons. On a patrol performing ‘Lifeguard Duty’ Tang rescued 22 American airmen. On Tang’s final patrol, the sub was in the Formosa Strait when she was struck by her own flawed torpedo (running in a circle). Commander O’Kane was on the bridge during the surface night attack (October 24–25, 1944) and was swept off the sub as it sank beneath his feet. O’Kane and a handful of Tang survivors were held as a Japanese prisoners (POW) until the war’s end some ten months later. Following his release, Commander O’Kane received the Medal of Honor for his “conspicuous gallantry and intrepidity” during his submarine’s final operations against Japanese shipping.

In the years following World War II, Commander O’Kane served with the Pacific Reserve Fleet, was Executive Officer of a submarine tender and was Commander Submarine Division 32. Promoted to the rank of Captain in July 1953, O’Kane commanded the submarine tender until June 1954 and then became Commander Submarine Squadron Seven. Captain O’Kane retired from active duty in July 1957 and, on the basis of his extensive combat awards, was simultaneously advanced to the rank of Rear Admiral. Admiral O’Kane died in Petaluma, California, in February 1994, he was 83 years of age.