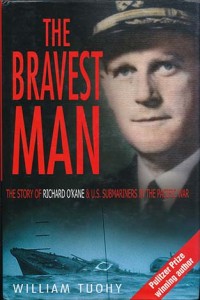 “The BRAVEST MAN” Richard O’Kane and the Amazing Submarine Adventures of the USS Tang. By William Tuohy. From this Pulitzer Prize-winning journalist comes the powerful true story of Richard O’Kane, America’s undersea ace of aces. The book also covers the story of other fearless submariners all set against the backdrop of the Pacific war. O’Kane saw Pacific action in three different submarines; as the executive officer aboard USS Wahoo (SS-238) and the skipper of USS Tang (SS-306). Wahoo was lost in 1943, after O’Kane departed. Tang was sunk by her own malfunctioning circle-run torpedo in October 1944, O’Kane survived the sinking and became a Japanese POW. Tuohy skillfully mixes the heat of battle action with the antics of the trough skippers and their crews to relive an age when heroism was in fashion, a time of threat, danger, challenge and sacrifice. 2001 first Hardback edition with dust jacket. Hardback edition is no longer in print. 422 pages, 32 black and white photos, 1 map, a cut-away diagram of an American Fleet submarine and an index.