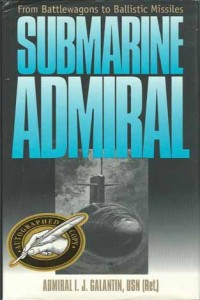 “SUBMARINE ADMIRAL” From Battlewagons to Ballistic Missiles. By Admiral I. J. Galantin, USN (Ret.). In this engaging personal memoir, Admiral Galantin chronicles the amazing evolution of the submarine, from the American Revolution to today’s nuclear subs. Form his years at Annapolis until his retirement in 1970, Galantin saw the U.S. Navy change over a fifty year span. During World War II Galantin was the skipper of the American sub USS Halibut (SS-232) and later wrote “Take Her Deep!” 1995 Hardback edition with dust jacket. 345 pages, 28 black and white photos, an index but no maps.

Autographed by the late author 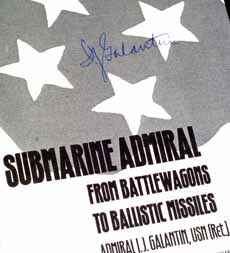 Admiral Ignatius Joseph “Pete” Galantin was born in New York City in 1910 and grew up in Illinois. Following his high school graduation, Galantin entered the U.S. Navy Academy in 1929 and graduated from Annapolis in 1933. After brief duty as a junior officer on board the battleship USS New York (BB-34) Galantin looked to the submarine service at New London, CT. 1936 found him as a lieutenant and gunnery officer with the USS Argonaut (SS-166). In 1940 he reported as executive officer of the USS S-24 (SS-129). In August 1942 Galantin assumed command of the submarine USS R-11 (SS-88). The following summer he saw his first war duty with the USS Sculpin (SS-191). Galantin had five Pacific patrols as skipper of the fleet submarine USS Halibut (SS-232) and was awarded the Navy Cross, the Silver Star Medal and two Gold Stars. From 1966 until his retirement in 1970 Galantin was Chief of Naval Material, with the rank of full admiral. In retirement, he published two books concerning submarines: “Take Her Deep,” a more or less autobiographical account of Galantin’s wartime action as skipper of USS Halibut and “Submarine Admiral” which describes the evolutionary process of the submarine in the U.S. Navy. Admiral Galantin was a member of the New York Society of Military and Naval Officers of the World Wars. He was married in 1935 to Virginia E. Jaeckel of New York. They had three daughters, six grandchildren and eight great-grandchildren. Admiral “Pete” Galantin died on July 8, 2004 at the age of 93. He was buried at the United States Naval Academy Cemetery with full military honors.