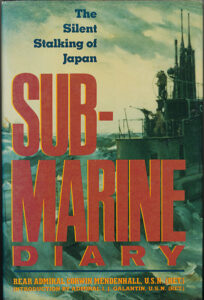 “SUBMARINE DIARY” The Silent Stalking of Japan. By Rear Admiral Corwin Mendenhall, USN (Ret.). Introduction by Admiral I. J. Galantin, USN (Ret.). When news came of the Japanese attack on Pearl Harbor (December 7, 1941), fleet submarine USS Sculpin (SS-191), stationed in the Philippines, quickly put out to sea in search of enemy ships. Her junior ensign in charge of torpedoes, Corwin Mendenhall, made seven patrols aboard Sculpin in the south and western Pacific. His next duty came with the submarine USS Pintado (SS-387). And with Pintado came four more World War II patrols against the Japanese. Not long after Mendanhall left Sculpin, the boat was lost in November 1943. “Submarine Diary” is the true story of those dangerous war patrols. No other book on the undersea war against the Imperial Japanese Navy provides as vivid and detailed account of what serving aboard a fleet submarine required. Corwin Mendenhall served under two skippers as he rose from a junior ensign to executive officer. 1991 first edition Hardback with dust jacket. 290 pages, 31 black and white photos with 3 maps. Appendix but no index. Crew rosters for submarines Sculpin and Pintado.

Autographed by the late author 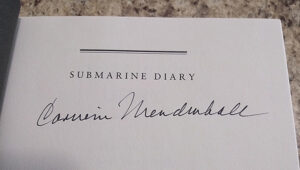