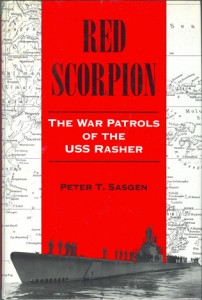 “RED SCORPION” The War Patrols of the USS Rasher. By Peter T. Sasgen. Commissioned in June of 1943, she became one of the most feared American submarines of World War II. The United States Navy named her USS Rasher (SS-269), but she was called the “Red Scorpion.” In the Pacific during World War II, the submarine and crew of Rasher made history with their aggressive tactics and relentless pursuit of the Japanese Navy producing an astounding combat record. In eight impressive war patrols she sank 18 Japanese ships, totaling 99,901 tons––the second-highest tonnage of the war. Rasher went on to earn a coveted Presidential Unit Citation. In August 1944, Rasher was on her fifth war patrol and operating off the Philippines. With Commander Henry Munson in charge the submarine had what became one of her most daring attacks of the war. Rasher sank four enemy vessels, including the Japanese aircraft carrier Taiyo. In “Red Scorpion” Navy veteran and author Peter Sasgen, who’s father (Peter J. Sasgen) served aboard Rasher, details the gripping true account of the storied warship, her dogged commanders, and the brave crew who made the submarine a legend in the annals of undersea warfare. Rare 1995 hardback edition with dust jacket. 366 pages, 6 black and white photographs, 12 maps, a complete Rasher crew roster, a glossary and an index. This book is now out-of-print.