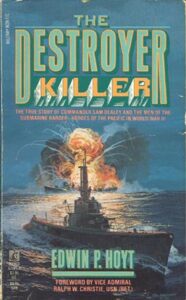 “The DESTROYER KILLER” By Edwin P. Hoyt. Foreword by Vice Admiral Ralph W. Christie, USN (Ret.). From the author of “Bowfin,” “Submarines At War” and many other great World War II naval books. This is true story of Commander Sam Dealey and the men of the submarine USS Harder (SS-257). Dealey earned the title ‘Destroyer Killer’ after sinking five Japanese destroyers during one of his many successful Pacific patrols. For his amazing achievements Dealey was decorated with four Navy Crosses. In August 1944 Harder was lost with all hands–Commander Dealey was posthumously awarded the Medal of Honor. This is the first and only edition of this very scarce book. It was never published in a hardback. 1989 first Paperback edition with very impressive color artwork on the cover. 222 pages, no photos maps or index.