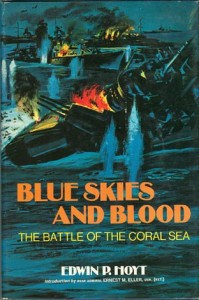 “BLUE SKIES And BLOOD” The Battle of the Coral Sea. By Edwin P. Hoyt. Introduction by Rear Admiral Ernest M. Eller, USN (Ret.). From the author of “The Destroyer Killer” and “Bowfin.” In the spring of 1942, following the Japanese attack on Pearl Harbor (December 7, 1941) the Japanese were advancing in the Pacific on all fronts. In what was America’s first major sea battle of World War II, they engaged the mighty Imperial Japanese Navy in the Coral Sea. Never before had carrier been matched against carrier. Yet in this battle, neither of the forces engaged one another in a ship-versus-ship confrontation. Here, Edwin Hoyt tells the entire story of this historic World War II battle. 1975 Hardback (book club) edition with a color dust jacket. 206 pages, 19 black and white photos, 8 maps and an index. Maps also appear inside the front and back covers.