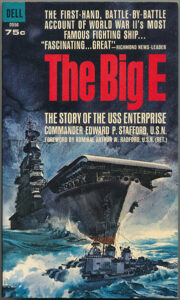 “The BIG E” The Thrilling Story of the USS Enterprise––and the Men who Sailed her to Glory. By Commander Edward P. Stafford, USN (Ret.). Foreword by Admiral Arthur W. Radford, USN (Ret.). The USS Enterprise (CV-6) was commissioned in 1938 and at the time the mightiest warship ever built. The great aircraft carrier was at sea on the day Pearl Harbor was attacked (December 7, 1941) and managed to survive the long Pacific war. During her often dangerous duty in World War II the Enterprise won 20 battle stars, sank 71 enemy vessels, and destroyed 911 enemy aircraft. The Japanese reported sinking Enterprise six times––but she managed to survive every time. Here is her fantastic yet true story. 1964 Paperback edition. 512 pages, 1 map, no photos, or index.  Commander Stafford also wrote, “Little Ship, Big War”

Then There Was One