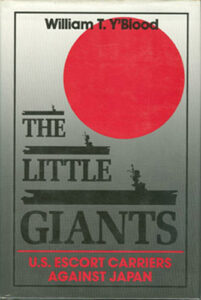 “The LITTLE GIANTS” U.S. Escort Carriers Against Japan. By William T. Y’Blood. The definitive work on American Escort Carrier (CVE) operations in the Pacific during World War II. From their beginnings as a carrier conversion to the mass-produced Casablanca-class CVE. This book deals with outstanding contributions by these ships in World War II––each and every Pacific campaign they fought. The substantial accomplishments of the CVE in such battles as Leyte Gulf, the Marianas, and Okinawa never gained the attention given the fast carriers, but there is little question that their vital operations played an important role in the Pacific campaign. These remarkably versatile vessels––called CVEs, baby flattops, and even jeeps carriers––hunted submarines, escorted convoys, provided air support, and performed dozens of other tasks that are vividly described in this book. Based on interviews with the CVE crewmen and on war diaries, ship histories, and other documents, it tells a moving story of escort carrier operations, from the work of the first CVEs to their final assignment transporting GIs home after the war. Seldom-seen photographs add to this fascinating portrait of the little giants. Includes many of the wild air-to-air combat action by their brave carrier pilots. Even some flight-deck accidents. Details on each of the CVEs lost in the Pacific. There is no other book that tells as much about Escort Carriers than “The Little Giants.” 1987 (NIP) Hardback book with dust jacket. Not a book club edition. 468 pages, 63 black and white photos, 3 CVE ship diagrams, 3 maps and an index. An appendix that includes a list of all CVE’s from CVE-1 to CVE-123. Two large maps inside the front and back covers detailing CVE operations in the Pacific during World War II. Hardback edition is long out of print.

“This book is a good overall history of the small escort carriers used in WW2. It represents good value in a part of naval history that is lightly covered.” – unknown reader