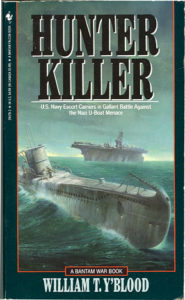 “HUNTER KILLER” U.S. Escort Carriers in the Battle of the Atlantic. By William T. Y’Blood. From the author of “The Little Giants” and “Red Sun Setting” comes another great book dealing with American Escort Carriers in World War II. Based on recently declassified material and scores of interviews with combat participants, Hunter Killer takes the reader onto the carrier flight deck and into the fighter cockpit during the longest continuing engagement of World War II––the Battle of the Atlantic. From the breaking of the German code to the sinking of the “jeep” carrier USS Block Island (CVE-21). From in-close anti-submarine encounters to the secret capture of the U-boat U-505 by the USS Guadalcanal (CVE-60), Hunter Killer is a stirring account of how U.S. escort carriers mercilessly hammered the German wolf-packs into submission. Sailing apart from the Allied convoys, the CVEs had complete freedom of action and frequently went on “hunt and kill” missions, allowing the German submarines no respite. Naval historian William Y’Blood explains here that the eighteen months between the spring of 1943––when the CVEs began to prowl the Atlantic––and November 1944, the average number of U-boats in daily operation was reduced from 108 to a mere 31. Though others helped win the Battle of the Atlantic, the influence of the escort carrier groups was profound. An excellent book, covering the true saga of American CVE’s and their destroyer escorts (DD’s and DE’s) in the Atlantic. 1992 Bantam Paperback edition. 339 pages, with maps, drawings, illustrations and an index, no photos.

“Fills a gap in World War II historiography by moving the converted tanker and escort carriers and their supporting destroyers to the center stage where they belong.” – American Historical Review

“An exciting chapter of the war at sea told well.” – Union-News / Sunday Republican