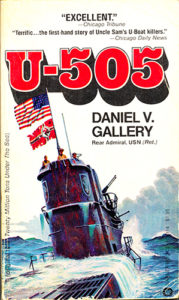 “U-505” By Rear-Admiral Daniel V. Gallery, USN (Ret.). In June 1944, Captain Gallery was the skipper of the American carrier USS Guadalcanal (CVE-60). The small carrier was operating in an Atlantic Task Group and aided by the destroyer USS Pillsbury (DE-133). Two pilots from Guadalcanal sighted the submarine running under the surface, and splashed the sea with gunfire to point out the contact to USS Pillsbury, USS Jenks (DE-665), and USS Chatelain (DE-149). Their depth charges blasted a hole in the outer hull of the submarine. Her inexperienced German captain surfaced his boat and ordered the crew to abandon ship. The Pillsbury lowered a boarding party and quickly captured the still-running U-505. It was the first enemy ship captured by the U.S. Navy on the high seas since 1815. The U-505 was towed 2,500 miles to Bermuda and revealed some of the German Navy’s most guarded secrets. U-505 is now permanently displayed at the Chicago Museum of Science and Industry. This exciting and true story tells of a brave and historic adventure on the high seas. Paperback edition, 317 pages, 18 page appendix, no photos or maps.