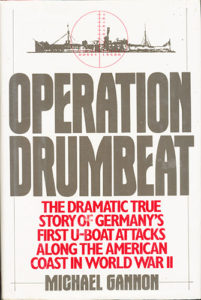 “OPERATION DRUMBEAT” The Dramatic True Story of Germany’s First U-Boat Attacks Along the American Coast in World War II. By Michael Gannon. The dramatic true World War II story of Germany’s first U-boat attacks along the American East Coast in 1942. Arguably the best book ever written on this fascinating subject––Gannon covers all the angles in Germany’s highly successful ‘Operation Drumbeat.’ Focusing much on the famed U-123, the most successful U-boat in the assault force, and on her commander, Reinhard Hardegen, who sank nineteen ships on two American patrols and twice received Germany’s highest decoration, the Knight’s Cross. Gannon also wrote the U-boat book titled “Black May.” 1990 first edition Hardback with dust jacket, not a Book Club. 490 pages, 31 black and white photos, charts, illustrations, a U-boat diagram and index. Large maps of the Atlantic inside front and back covers.