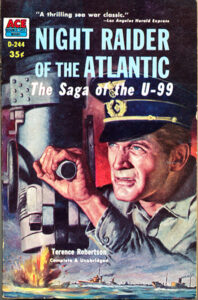 “NIGHT RAIDER Of The ATLANTIC” The Saga of the U-99. By Terence Robertson. The complete story of Germany’s top-scoring U-boat Ace of World War II––Otto Kretschmer. Before his U-99 was sunk in March of 1941, Kretschmer destroyed 44 Allied ships totaling over 266,000 tons. As his U-boat disappeared beneath the waves the British Navy pulled Kretschmer from the sea and the famed commander spent the balance of the war as a POW. Here is the entire story of famed skipper Otto Kretschmer and his remarkable U-99.  Book originally released as “The  Golden Horseshoe.” 1955 Paperback edition. 254 pages, no photos, maps or index.