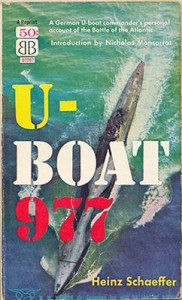 “U-BOAT 977” By Heinz Schaeffer. Introduction by Nicholas Monsarrat. U-boat 977 was the German submarine that escaped to Argentina at the end of World War II. This epic journey started from Bergen in Norway, where in April 1945 it was temporarily based, and took three and a half months to complete. Because of continuing allied naval activity the German commander decided to use their snorkel and made the first part of the journey underwater. Before surfacing near the west coast of Africa U-977 had spent a remarkable sixty-six days submerged! Believed to have been a submarine submergence voyage record. It was inevitable that when U-977’s journey and escape to Argentina and its port of Mar del Plata became known it would be the center of rumor and theory. Why did U-977 make this long journey of escape when, for Germany, the war was over? Was it because it was carrying Nazi gold to continue the fight? Were escaping Nazi leaders on board? Was Hitler on board? The stories were many and for years, after the end of World War II, provided material for novelists, film-makers and historians alike. Heinz Schaeffer, the commander of U-977, has written a full account of his earlier career that culminated in this last and historic command. It depicts the grueling aspects of a submariner’s life aboard a vessel that was subjected to the harsh conditions of the seas and oceans. As an experienced commander Schaeffer took part in many of the decisive U-boat operations in the North Sea and Atlantic Ocean. In the final months of the war, and in common with most surviving U-boat commanders, Schaeffer and his crew came under constant attacks from Allied aircraft and surface ships. The final part of U-boat 977 is Schaeffer’s account of the journey to Argentina and ‘lays to rest’ some of the more ‘fanciful’ stories that followed its arrival. Paperback edition. 190 pages, U-boat diagram, No photos or index.

“Don’t miss out on this one. You have action packed history: the Gibraltar passage, underwater fuelling, snorkeling, the southern cross, three boat passages of the Biscay, command intricacies and combat, a Nicholas Monsarrat (The Cruel Sea) introduction and a fantastic tale of escape and surrender to Argentina 3 months after the end of the war, leading to suspicion of a possible Hitler escape. A must read if you can find it. Mind you I have read many many books on U-Boat war, including the 2 volumes of Hitler’s U-Boat war and Operation Drumbeat. Contrary to those history books this one gets you down in the sub. Hold your breath and dive.” – Marc Boulanger

“I have finished it few days ago. I respect the point of view of the other readers, but without try to idolize the U-boat’s captains, they were an incredible self control, strong and courage fulfilled persons. This book reveals some scenes that will be hard to find in other books. The attack with depth charges and the feeling that the writer reflects in the book it’s very real, as if you would have been there. The chapter of the trip to Cape Verde Island’s and the fun that they found there tells you that they were persons like probably you and me are, but under a very unpleasant and very demanding circumstances. The last part about days and the personal events of the captain after the war need, as someone says above, more paragraphs. Well friends, try to get a copy and read it. To me it’s one of the best in this subject.” – Eduardo Rubio

“I must admit that I have never heard of this story before. I heard about a U-boat leaving the Baltic Sea at about the time Hitler killed himself, but the story about the U-977 is amazing. Not only did she break the blockade, but surrendered to the Argentines in August of 1945. This boat had little fuel, but some provisions, and an under-strength crew. The author relates his own training in this book and then details this amazing journey. This is a nice little true story about World War II. It reads like a novel, but the author relates this is all true. It is a different story than one usually finds about WWII.” – Kevin M. Quigg