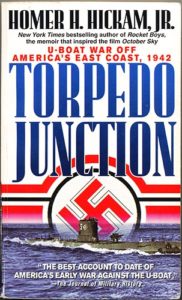 “TORPEDO JUNCTION” U-Boat War off America’s East Coast, 1942. By Homer H. Hickam, Jr. In early 1942, the German launched ‘Operation Drumbeat’ sending U-boats the open waters off the American East Coast. Unopposed by the U.S. Navy they turned the shipping lanes off Cape Hatteras into a sea of death. A moving and impressive ship-by-ship account of terror and rescue at sea, where Germany’s sub commanders found unparalleled success. A whopping 259 ships were sunk, littering the ocean with cargo and bodies––never was Germany closer to winning the war! One of the best books on this subject! Dell Paperback edition. 409 pages, 12 black and white photos, 4 maps and an impressive 10 page appendix with an index.