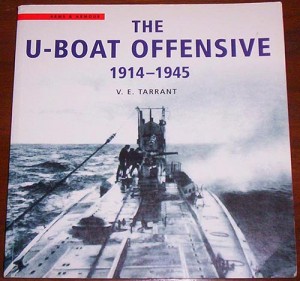 “The U-Boat Offensive 1914 – 1945” By V.E. Tarrant. During the two World War’s (World War I and World War II), German submarines sank over 8,000 merchant vessels grossing more than 27 million tons. This book tells the twin stories of the Battles of the Atlantic in a fair and impartial account. Strategic failings, on both sides, became apparent at almost every turn, but there can be no doubting the valor of U-boat crews and those who pursued them. A large, 10 by 10 inch Softbound edition. 190 pages, a staggering 116 black and white photographs from both wars! Maps, diagrams, appendix and an index.