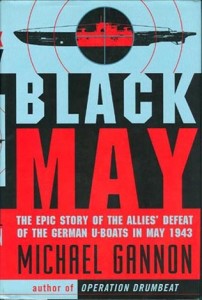 “BLACK MAY” The Epic Story of the Allies’ Defeat of the German U-Boats in May 1943. By Michael Gannon. Author of the bestselling World War II U-boat book “Operation Drumbeat.” Gannon unveils another excellent segment in WWII U-boat history. In May 1943, the Allies destroyed 41 U-boats and damaged 37 others in the North Atlantic––sending the Nazi U-boat wolf pack running. Drawing on original documents in German, British, U.S., and Canadian archives, as well as interviews with surviving participants, Michael Gannon describes the exciting sea and air battles, frequently taking the reader inside the U-boats themselves. At U-boat headquarters in Berlin, despondent naval officers spoke of “Black May.” It was a defeat from which the German U-boat fleet never recovered. 1998 first edition Hardback with dust jacket. 492 pages, 44 black and white photos, 2 maps and an index.