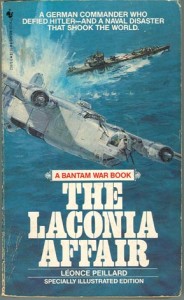 “The LACONIA AFFAIR” By Leonce Peillard. On the night of September 12, 1942, the German submarine U-156 finds the passenger liner RMS Laconia cruising off the west coast of Africa. The British troopship was carrying 463 officers and crew, 80 civilians, 286 British Army soldiers, 1,793 Italian POW’s and 103 Polish soldiers totaling over 2,700 lives. Late that night German Commander Hartenstein decided to sink the liner using two torpedoes. After the sinking, Hartenstein discovers the Laconia was transporting Italian POW’s to Canada. The U-boat commander then makes a fateful decision to rescue the survivors, defying Hitler’s strict orders to leave them on the sea. Thus begins a daring and true World War II story that would rock the World. Paperback edition, 232 pages with countless illustrations and 4 maps. No photos or index.