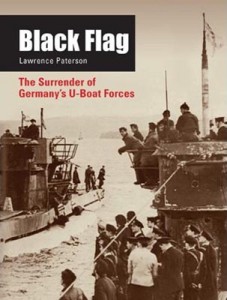 “BLACK FLAG” The Surrender of Germany’s U-Boat Forces. By Lawrence Paterson. On the eve of Germany’s World War II surrender in May 1945, Grossadmiral Karl Doenitz commanded thousands of loyal and active men of the U-boat service. Still fully armed and unbroken in morale, enclaves of these men occupied bases stretching from Norway to France, where cadres of U-boat men fought on in ports that defied besieging Allied troops to the last. At sea U-boats still operated on a war footing around Britain, the coasts of the United States and as far as Malaya. Following the agreement to surrender, these large formations needed to be disarmed––often by markedly inferior forces––and the boats at sea located and escorted into the harbors of their erstwhile enemies. Neither side knew entirely what to expect, and many of the encounters were tense; in some cases there were unsavory incidents, and stories of worse. For many Allied personnel it was their first glimpse of the dreaded U-boat menace and both sides were forced to exercise considerable restraint to avoid compromising the terms of Germany’s surrender. One of the last but most dramatic acts of the naval war, the story of how the surrender was handled has never been treated at length before. This book uncovers much new material about the process itself and the ruthless aftermath for both the crews and their boats. New Hardback book, with dust jacket. 196 pages, 97 black and white photographs. Glossary, appendix and index, no maps. Retail price $30 save $10

“Great book on U-Boats. Great research on what happened to the U-Boats after surrender. A must for serious collectors ” – Lonnie W. Morris, Jr.

“Black Flag has a great among of detail about each U-boat at the end of the war and many interesting photo’s that make this a interesting read. I personally enjoy a book with more “overview”, less detail and more stories about the personal happenings of crews that were involved in unusual situations.” – Cayman