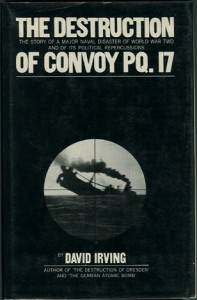 “The DESTRUCTION Of CONVOY PQ-17” The Story of a Major Naval Disaster of World War Two and of its Political Repercussions. By David Irving. In June 1942, thirty-five Allied ships set-out for Russia, carrying vital material for the Eastern front. Two weeks later, 24 of those freighters and their cargo lay on the bottom of the Barents Sea, victims of German U-boats. The massacre cost the Allies 142,000 tons of shipping and countless lives. Here is the full and complete story of this ill-fated convoy. Hour-by-hour and blow-by-blow account of this catastrophic encounter. 1968 Hardback with dust jacket, Not a Book Club edition. 337 pages, 61 black and white photos, 5 maps, 2 diagrams and an index.