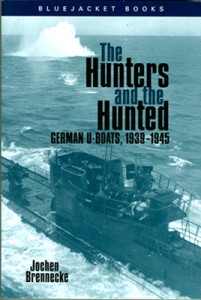 “The HUNTERS And The HUNTED” German U-boats, 1939–1945. By Jochen Brennecke. German submarine aces of World War II tell their own unique stories of war and death under the sea. Here is the full story of the men and weapons that almost won the war for Hitler––first-hand stories of dramatic and daring action by the U-boat aces themselves. The silent death they deal to the ships above them, and the dark death that waits for them in the depths of the sea. Many of these unusual yet true episodes have never appeared in any other books. The fluctuating fortunes of the German submarine war, the successes gained, the terrible losses and bitter disappointments caused by improving Allied countermeasures, have rarely been so vividly described as in this classic tale of U-boat warfare. Tapping on the experiences of the boat commanders, chief engineers, and others who served, the author, himself a veteran of the German Navy, chronicles combat beneath the waves from the earliest exploits through the final days of 1945. Included are chapters on U-boat aces Otto Kretschmer (U-99), Gunther Prien (U-47), Wolfgang Luth, U-74 and the Bismarck. The Caribbean theater, the tragic Laconia incident of 1942, Doenitz and the Walter U-boat, daring escapes, and the final break-up of the U-boat force in 1945. First published in 1957, this illustrated volume has entertained and informed a generation of U-boat enthusiasts. New Softbound, 320 pages, 42 historic black and white photographs, no index or maps.

“An interesting and authoritative book by a former German naval officer.” – Booklist

“Does not glorify the Germans but rather gives vivid descriptions of the battles fought.” – Library Journal

“A useful look at the human dimensions of the conflict.” – Timothy P. Mulligan, author of “Lone Wolf The Life and Death of U-Boat Ace Werner Henke.”