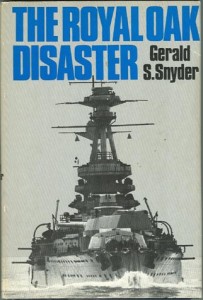 “The ROYAL OAK DISASTER” By Gerald S. Snyder. Barely a month after Germany declared war on Britain (October 1939), Gunther Prien guided his submarine U-47 into Scapa Flow and torpedoed the 29,000-ton British battleship H.M.S. Royal Oak. When the warship sank, 833 men perished, making this one of the worst disasters in the history of the Royal Navy. When the U-boat commander returned to Germany, he was greeted as a war hero. Winston Churchill called Prien’s raid, “a remarkable exploit of professional skill and daring.” So unbelievable was the feat that some still insist it must have been sabotage. Commander Prien and his U-47 failed to survive World War II, the boat was lost with all hands in March of 1941. Here is the true story, based on facts and post World War II interviews. Hardback (Book Club) edition with dust jacket. 261, 40 black and white photographs, 1 map, 1 diagram and an index.