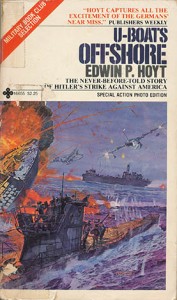 “U-BOATS OFFSHORE” When Hitler Struck America. By Edwin P. Hoyt. From the author of “Bowfin,” “Submarines At War” and so many other great World War II naval books. In early 1942, Hitler’s U-boat execute “Operation Drumbeat”––sinking ships off the shore of America’s East Coast. The German’s began sinking U.S. ships faster than we could fill them. Soon the ocean was spewing oil and wreckage while American’s were killed. This is the heroic untold story of the courageous Americans who waged a relentless fight to drive the Nazi menace from our shores. Paperback edition, 285 pages, 23 black and white photos with maps and diagrams. See above photo for book cover condition.