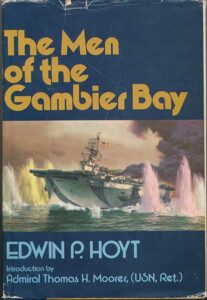 “The MEN Of The GAMBIER BAY” By Edwin P. Hoyt. Introduction by Admiral Thomas H. Moorer, USN (Ret.). From the author of “The Battle of Leyte Gulf” and “Bowfin”. The escort carrier USS Gambier Bay (CVE-73) was a Casablanca-class carrier, commissioned in December 1943, displacing just 7,900 tons. The lightly armed ship departed Pearl Harbor and went into action in September 1944––she never returned. Gambier Bay took part in the Allied landings on Saipan then later fought for the islands of Peleliu and Angaur. In October of 1944 the vessel and her brave pilots of Composite Squadron 10 (VC-10) found themselves involved in the Battle of Leyte Gulf. On the morning of October 25, 1944 Gambier Bay was sunk by surface fire from the Imperial Japanese Navy. The gallant little CVE became the only American carrier to be sunk by enemy surface ships during World War II. And here is her complete story. The only book to tell of this carrier. Now out-of-print and a difficult book to find. Rare 1979 first edition Hardback with color dust jacket. 254 pages, 52 black and white photos with several maps and an index. A large map inside front and back covers detailing Gambier Bay routes in the Pacific. Dust jacket show wear as noted in above photo. Inside is pages are nice and clean.

The Last Stand Of the Tin Can Sailors