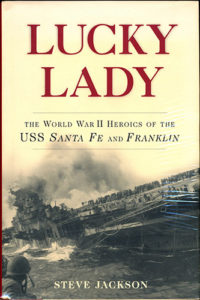 “LUCKY LADY” The World War II Heroics of the USS Santa Fe and Franklin. By Steve Jackson. On March 19, 1945, a Japanese bomber screamed toward the American carrier USS Franklin (CV-13) and dropped two 500-pound bombs through the ship’s decks, killing hundreds in just the first few moments. As the Franklin listed dangerously near capsizing, the light cruiser USS Santa Fe (CL -60), nicknamed the “Lucky Lady,” bellied up alongside her flaming hull and attempted the most daring rescue in U.S. naval history. “Lucky Lady” recreates the legendary World War II careers of the USS Franklin—the most decorated naval vessel of the war—and the USS Santa Fe—unparalleled in frontline service and avoiding casualties—through the eyes of the men onboard. In the post-attack devastation, 832 Franklin crewmembers were killed in what was the U.S. Navy’s second worst disaster in history. Perspectives range from the highest levels of rank and flying altitude to the bottom of the pecking odder deep within the ships’ bowels. Through the bloody years of the Pacific campaign—from Pearl Harbor to the Philippines to the coast of Japan, and finally the decimated city of Nagasaki—the crewmembers adapted to the routines of Navy life, braving kamikazes, ship-to-ship combat, and coping with the deaths of crewmates. New Hardback edition with dust jacket. 504 pages, 19 black and white photos, and index. Book is now out-of-print and difficult to find!

Then There Was One