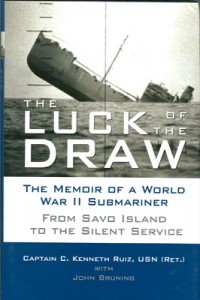 “The LUCK Of The DRAW” The Memoir of a World War II Submariner. By Captain C. Kenneth Ruiz, USN (Ret.) with John Bruning. The luck of the draw saved the life of author C. Kenneth Ruiz. It was August 1942 and he was fresh out of the U.S. Naval Academy. Ruiz and a classmate had been assigned to the same ship—the USS Vincennes (CA-44). In the summer of 1942 the cruiser was part of an Allied fleet sent to patrol off Savo Island in defense of the U.S. Marines who were landing nearby on Guadalcanal. The two ensigns drew cards to see who would stand watch on the bridge. Ruiz won the draw and later that night (August 8, 1942) the fleet was unexpectedly surprised by several large Japanese warships. Vincennes took several direct hits—one instantly killed his classmate on the bridge. The heavily damaged cruiser sank to the bottom taking 332 men. Following the demise of the Vincennes, Ruiz was rescued from the sea, then volunteered for duty in the “silent service” and was assigned to the submarine USS Pollack (SS-180). He saw eight action-packed war patrols under three different skippers. The author tells a true and exciting story of his Pacific duty in World War II. An officer who fought the Japanese from both above and below the surface of the sea. New hardback with dust jacket. 304 pages, 19 black and white photographs, 4 maps, no index.

“You start off in an out of control crash dive to your imminent death and Kenneth Ruiz has you immersed in a Tom Clancy styled epic, the only difference, this is a real life and death struggle. Not only does the crew have to battle the Japanese but they also are fighting the antiquated USS Pollack. You won’t find the author giving you family history like a lot of military authors, instead you are with the crew 250 feet below the surface being depth charged or on the surface, with the spray in your face, charging after the enemy. For the movie goer there is “DAS BOOT” for the reader there is Kenneth Ruiz’s “The LUCK of The DRAW”. – B. Hall

“I bought this book simply because I had served with Captain Ruiz later in his career (Fighter Squadron 102). As a lowly Petty Officer 3rd. class I had little contact with him, a Lieutenant Commander, and the “Navy’s caste system” prevented me from getting to know him. However I remember him as an unassuming, no nonsense, by-the-book officer and Pilot who commanded our respect.  As an old “Airdale” with only “movie” knowledge of subs, I was pleasantly surprised to find this a “can’t put down” tale of a true American Hero. Buying and reading this book was my LUCK of the DRAW.” – J.E. Diggins

C. Kenneth Ruiz graduated from the United States Naval Academy in 1942. After his service in surface ships and submarines in World War II he became a naval aviator and was executive officer of a jet fighter squadron during the Korean War. Ruiz later commanded an attack aircraft squadron and two different ships during combat in the Vietnam War. Captain Ruiz and his wife Judith now reside in Las Vegas, Nevada.