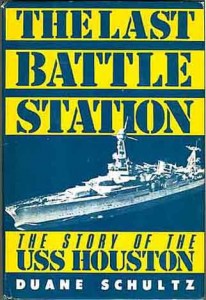 “The LAST BATTLE STATION” The Story of the USS Houston. By Duane Schultz. February 28, 1942: “Enemy Forces Engaged!” This terse message was the last word heard from the USS Houston (CA-30). Launched in 1929 it had once been called the Flagship of the Asiatic Fleet. But in 1941 the old cruiser was obsolete, a victim of budge cutbacks. With condemned ammunition, minimal armor, and no radar she went into a fight against the mighty Japanese fleet. In a desperate battle against overwhelming odds Houston sank beneath the waves off the coast of Java. This riveting saga recounts the hour-by-hour battle and tells of the courage by the Houston crew and survivors become Japanese POW’s. 1985 Hardback (Book Club) edition with dust jacket. 271 pages, 38 black and white photos, 1 map, 2 diagrams and an index. Difficult book to find.