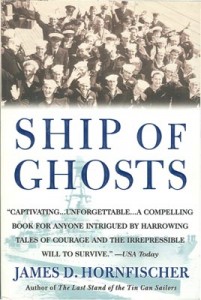 “SHIP Of GHOSTS” The Story of the USS Houston, FDR’s Legendary Lost Cruiser, and the Epic Saga Of Her Survivors. By James D. Hornfischer. From the author of “The Last Stand of the Tin Can Sailors.” Launched in 1929 the USS Houston (CA-30) had once been called the Flagship of the Asiatic Fleet. Renowned as President Roosevelt’s’ (FDR’s) favorite warship, the heavy cruiser entered the annals of naval legend when she was lost in the Pacific war, in early 1942. Her cryptic final radio message gave no hint of the odds she’d faced––or of the fate of those who lived through her devastating last battle with the Japanese. Houston’s survivors would soon envy the dead. They were captured and made slaves on Japan’s infamous Burman-Thaland Death Railway, dubiously memorialized in the Hollywood film “Bridge on the River Kwai.” Using journals and letters, rare historical documents, testimony from postwar Japanese war crimes tribunals, and the eyewitnesses accounts of Houston’s survivors, author James Hornfischer has crafted a testament to human valor so riveting and awe-inspiring, it’s easy to forget that every word of it is true! New Softbound edition. 530 pages, 93 black and white photos, 1 map, USS Houston crew roster and an index.

“Hornfischer’s new history of the last days of USS Houston (CA30) covers the story of USS Houston from her launch through her sinking at the Battle of Sunda Strait, Java, February 1942. Most of the volume covers her wartime service with the United States Asiatic fleet, and the subsequent ordeals of her surviving crewmembers as prisoners of war in Java, Burma, Thailand and Japan. The tales of valor, resistance, and survival in the face of the impossible circumstances of Asiatic Fleet, and of her crew’s survival in prisoner of war camps, have long awaited telling. Hornfischer deserves great credit for obtaining and presenting the tale, and for honoring the last great men of a generation of WW2 veterans who are rapidly dwindling in number.
The story of USS Houston’s service as Asiatic Fleet’s flagship when America entered the war has only been told once before with any competence (E.P. Hoyt’s “The Lonely Ships”) — but not with the detail provided by Hornfischer. More importantly, the story of USS Houston’s survivors, as they worked on the Burma-Thai death railway, and in at least one instance, as slave labor in a Japanese shipyard, and the endurance, resistance to Imperial Japanese Army sadistic brutality, and the prisoners’ acts of defiance has never been told before.
This is Hornfischer’s second widely available entry exploring the courage and valor of men of the US Navy in WW2 who, in some circumstances, faced very long odds and survived. Those who have read Hornfischer’s “Last Stand of the Tin Can Sailors” will be pleased with this new entry. “Ship of Ghosts” is sure to be another candidate for the Samuel E. Morison award for naval history.” – Michael Diehl

“When I first read the sample pages on Amazon, it reminded me of those Civil War books w/ the flowery language in place of facts/1st hand experiences – but I was going to get this book cause there are rarely new WWII stories. The only thing I had know about the Houston was that it had been lost early in the war & had only seen that 1 Japanese photo of it engulfed in shell splashes (not included here unfortunately – probably too sensitive!) Well, I was wrong! This IS an epic story, more involved than the books I have on the Indianapolis, Juneau or Bismarck, written in an easy-reading style, (different than most of my WWII books) full of human interest stories & personal experiences – I read it in 10hrs in 2 sittings. 100 pages of the 530 are notes, but it includes the crew list, so it’s a good value for your $18 – not like that new Midway book ‘Shattered Sword’ which is half technical info. I’m going to get this authors other ‘Last Stand’ book. And hey – if you’re going to review these books, don’t go on & on w/ all the details / contents like some of these guys – why bother reading it. You’d think these guys are writing their own book!” – Michael J. Maxwell