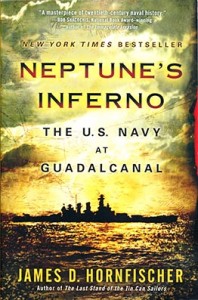 “NEPTUNE’s INFERNO” The U.S. Navy At Guadalcanal.  By James D. Hornfischer. From the author of “The Last Stand of the Tin Can Sailors.” The World War II Battle of Guadalcanal has long been heralded as a Marine victory. Now, with his powerful portrait of the Navy’s sacrifice, James D. Hornfischer tells for the first time the full story of the men who fought in destroyers, cruisers, and battleships in the narrow, deadly waters of “Ironbottom Sound.” Here, in stunning cinematic detail, are the seven major naval actions that began in August 1942, a time when the war seemed unwinnable and America fought on a shoestring, with the outcome always in doubt. Working from new interviews with survivors, unpublished eyewitness accounts, and newly available documents, Hornfischer paints a vivid picture of the officers and enlisted men who opposed the Japanese in America’s hour of need. The first major work on this subject in almost two decades, “Neptune’s Inferno” does what all great battle narratives do: It tells the gripping human stories behind the momentous events and critical decisions that altered the course of history and shaped so many lives. Hornfischer also wrote “The Last Stand of the Tin Can Sailors” and “Ship of Ghosts.” New Softbound book. 516 pages, 100 black and white photographs, many maps, diagrams and an index. Retail was $18.00 purchase here for just $16.95

“First, the recommendation: If you read naval history books, or a WWII history buff, this is a must-read book. Hornfischer has captured the full scope of the Navy’s action at Guadalcanal, within the larger picture of the whole campaign. It’s a big story. WWII buffs know Guadalcanal as the pivotal campaign where the Allies fought Japan from an offensive posture to a defensive one. Less well understood is that the US Navy made the first effective use of electronically directed fire at Guadalcanal. This created an immediate advantage for the Allies, and helped win the campaign, but stubbornness and lack of understanding of the new technology prevented it from being used to the fullest extent. Until Guadalcanal, navies still steamed in lines, attempting to “cross the T”. After Guadalcanal, they started to understand how radar changed everything. This is just one of the many sub-plots that Hornfischer successfully weaves into his big picture. The Guadalcanal campaign lasted six months. It’s all here: every battle and every ship. It even feels like every shell is also here, as Hornfischer describes the damage caused by each ship’s battery of 5 inch through 16 inch guns. You really get a sense of the pressure the Navy was under as each ship was sunk (including carriers, battleships, cruisers and 25 destroyers!) or retired from battle due to damage. In the end, after tremendous losses on both sides, the Japanese quit the struggle. Their ship and aircraft losses had been similar to those of the Allies, but theirs were irreplaceable, while the Allies were just starting to ramp up production of ships, aircraft, soldiers, sailors & aircrews. Highly recommended.” – Dave Millan