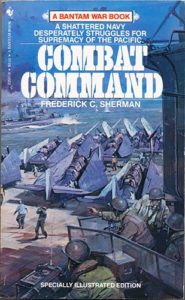 “COMBAT COMMAND” By Fredrick C. Sherman. Preface by Fleet Admiral William F. Halsey, USN (Ret.). A shattered Navy desperately struggles for supremacy of the biggest battlefield of World War II––the Pacific Ocean. Death in the air and blood in the water, that was the war in the Pacific. “Combat Command” covers the entire epic story of the Pacific Campaign: the savage sea battles, the grand strategies, the tragic blunders, and the tremendous sacrifices and individual heroism of our men at war. The late author served as a Rear Admiral in the Pacific during World War II. Originally published in 1950. This is a 1982 Paperback. 377 pages, countless illustrations, 6 maps, a large 39 page index, no photos.

Frederick C Sherman (May 27, 1888 – July 27, 1957) was a highly decorated admiral of the U.S. Navy during World War II. Sherman graduated from the United States Naval Academy in 1910. He served as commanding officer of submarines H-2 and O-7 during World War I. After becoming a naval aviator, Sherman served as executive officer of  the carrier USS Saratoga (CV-3) in 1937. He commanded USS Lexington (CV-2) from 1940 until her loss in the Battle of the Coral Sea in May of 1942. Promoted to rear admiral, he served as assistant chief of staff to COMINCH Admiral Ernest King until the end of 1942. He served in the Fast Carrier Task Force, as Commander, Carrier Division 2 in 1943, and as Commander, Task Group 38.3 in 1944–45. Sherman was a three-time recipient of the Navy Cross. Promoted to vice admiral in 1945, he became Commander, United States Fifth Fleet before retiring in 1947. Frederick Sherman died on July 27, 1957 in San Diego, California. Sherman wrote Combat Command, a history of the Pacific Theater of World War II, drawing on his personal experiences.