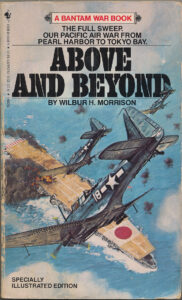 “ABOVE And BEYOND 1941 – 1945” By Wilbur H. Morrison. The full sweep, our Pacific air war from Pearl Harbor to Tokyo Bay. Here is the revealing story of the air war in the Pacific during World War II. The tactics, surprises, and blunders, as seen through the eyes of the pilot’s and commanders themselves. Air historian, Wilbur H. Morrison has talked to the men who were there, on both sides of the war. He has also used declassified Navy documents in this gripping and comprehensive account of World War II carrier aviation under fire. Here too are the great commanders of the war, the arrogant General Douglas MacArthur, the unpredictable Admiral William ‘Bull’ Halsey, the caustic Admiral Ernest King, and the vigorous Admiral Chester Nimitz. Here above all are the courageous pilots themselves, those bold and dedicated Americans who brought a mighty empire to its knees. 1986 Bantam Paperback edition, 371 pages, with maps, illustrations and an index, no photos.