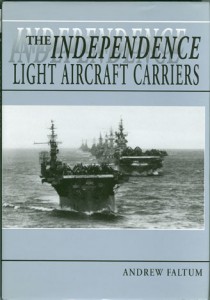 “The INDEPENDENCE LIGHT AIRCRAFT CARRIERS” By Andrew Faltum. Naval aviation and aircraft carrier enthusiast and former intelligence officer Faltum details the light “Independence-class” carriers that formed part of the fast-carrier task forces of World War II. The United States Navy converted nine (9) light cruiser hulls already under construction into these smaller carriers. For their size they were well-armed and efficient ships beloved by their dedicated crews. The Independence carrier, known by many as a “CVL” saw action in World War II, the Korean War and some later served in the French and Spanish navies. One of these carriers, the USS Princeton (CVL-23) was lost in World War II, today, none remain. 2002 Hardback edition with dust jacket. 160 pages with 49 historic black and white photo, 8 diagrams, 3 maps and an index. Large CVL diagrams inside front and back covers.