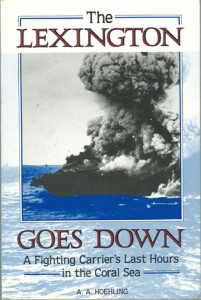 “The LEXINGTON GOES DOWN” A Fighting Carrier’s Last Hours in the Coral Sea. By A. A. Hoehling. At the outbreak of the Pacific war in 1941, America had only six carriers; one of the oldest was the USS Lexington (CV-2). Commissioned in late 1927, the carrier was nicknamed the “Gray Lady” or “Lady Lex.” The Lexington was not at Pearl Harbor when the Japanese attacked in December 1941. But the flat-top was sent into action in the spring of 1942, and faced the Japanese at the Battle of the Coral Sea. It was America’s first major sea battle of World War II. Author Hoehling tells of the Lexington’s final hours. The vessel was struck by two torpedoes and two bombs. Lexington eventually sank beneath the waves on May 8, 1942. 1993 Hardback edition with dust jacket. Note: Upper right corner of jacket is torn, now repaired and difficult to see in attached book photo. 208 pages, 32 black and white photographs, official USS Lexington casualty list. no maps or index. Hoehling also wrote “The Franklin Comes Home.”