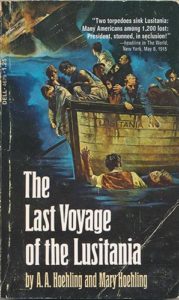 “The LAST VOYAGE of the LUSITANIA” By A.A. Hoehling and Mary Hoehling. She was the biggest, the fastest, the most luxurious ocean liner afloat. In spite of German warnings that she could “out-run any U-boat”, in spite of German warnings the Lusitania sailed on schedule, on May 1, 1915 with nearly 2,000 passengers and crew. On May 7, 1915, Lusitania was torpedoed by the German submarine U-20 off the southwest coast of Ireland. She sank within 18 minutes with the loss of some 1,200 men, women and children, many of them American. In the hipe of her tragic sinking, the event would draw the United States into World War I. 1974 Paperback edition. 256 pages, no photos or maps. Includes an index.