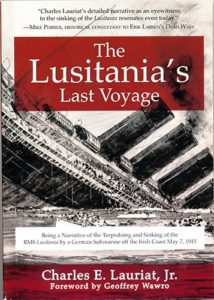 “The LUSITANIA’s LAST VOYAGE“ By Charles E. Lauriat, Jr. Foreword by Geoffrey Wawro. A firsthand account of the Lusitania’s doomed final voyage. On May 7, 1915, the German U-boat, U-20 fired a torpedo into the side of the passenger liner RMS Lusitania on its way to Liverpool, England. This act of war had a terrible toll; of the 1,962 passengers and crew, 1,191 lost their lives, many of them women and children. One of the passengers on the ship was Charles E. Lauriat, Jr., a rare book dealer who traveled regularly to London for business. When the German embassy stated that any ships of Great Britain would be considered fair targets, Lauriat, along with most of the other passengers, dismissed the notion that a civilian liner would actually be attacked. Lauriat’s memoir of the historic journey recreates the torpedo attack, describing the listing ship as it filled with water and people scrambled for lifeboats. Lauriat details the rescue that came too late for most of his fellow passengers. Then he goes on to point out the many faults of the official inquiry, telling the true story of that tragic day. New softbound book, 163 pages. 17 black and white photos. Diagrams with Lusitania deck plans. No appendix.

Charles Lauriat, Jr., was born in 1874 to Charles Emelius Lauriat, Sr., and his wife, Harriet Fidelia Page. The company Charles E. Lauriat Company, booksellers, of Boston, Massachusetts, belonged to Charles, Sr.  Charles, Jr. married Marian Bullard and had a son, Nathaniel Page Lauriat. Lauriat Jr., was also an amateur sailor. In May of 1915, forty-year-old Charles was on board the ill-fated RMS Lusitania for a routine business trip. His company specialized in rare-books. After the Lusitania sinking and upon his safe return to Boston, Charles became president of the largest book importing firms in New England. Later in 1915 he wrote “The Lusitania’s Last Voyage.” Charles Lauriat, Jr., died on December 28, 1937, at the age of 63. He is buried in Mount Auburn Cemetery in Cambridge and Watertown, Massachusetts. Lauriat Books remained in business with over 20 locations in Massachusetts, Rhode Island, Connecticut, New Hampshire, and New York until it filed for bankruptcy in June 1999. The company folded after 127 years due to competition from large bookstore chains and internet booksellers.