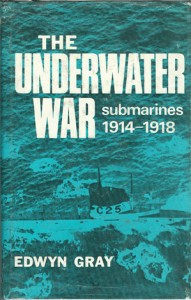 “The UNDERWATER WAR” Submarines 1914–1918. By Edwyn Gray. This is the story of the development by the British of a primitive, unreliable and dangerous fighting machine. Gray describes the inception and early days of the Submarine Service, it’s struggle against the naval bureaucracy, it’s experiments with early subs, the terrible disasters and the dramatic successes. The author also brings to life the men who took the risks in these early fragile boats and whose courage and endurance enabled them to smash German shipping during World War I. 1971 Hardback edition with dust jacket. A former library book with the usual marking. Dust jacket has been covered in new protective clear plastic. 259 pages, with 18 black and white photos, 4 maps, 8 page appendix and an index. Larger British E-boat diagrams inside front and back covers.