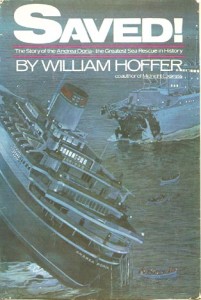 “SAVED!” The Story of the Andrea Doria – the Greatest Sea Rescue in History. By William Hoffer. On July 25, 1956, the Italian liner SS Andrea Doria was approaching the coast of Nantucket, Massachusetts, bound for New York City. At 11:10 pm that dark foggy night, the eastbound Swedish liner MS Stockholm collided with the Andrea Doria. In what became one of history’s most infamous maritime disasters, the Andrea Doria sank. The doomed liner managed to stay afloat for over 11 hours after the accidental ramming. 1,660 passengers and crew were rescued and survived, while 46 people died as a consequence of the collision. In this engrossing book, William Hoffer has re-created the events of this terrifying night and tells the spectacular story of the greatest sea rescue in modern history. 1979 Hardback (Book Club) edition with dust jacket. 215 pages, 38 black and white photos, a large Andrea Doria ship diagram inside front and back covers, and an index. Note: Dust jacket has a few chips on the opening edge, not visible in the above photo.