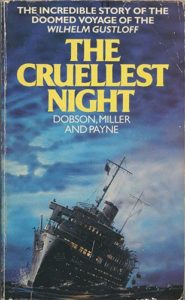 “The CRUELEST NIGHT” The incredible story of the doomed voyage of the greatest maritime tragedies of Wilhelm Gustloff. By Christopher Dobson, John Miller and Ronald Payne. Told for the first time, the full story of one of the worst sea tragedies of all time. Russian submarine captain Alexander Marinesko guided his S-13 into the Baltic Sea in early 1945 where he discovered the German liner Wilhelm Gustloff. The Nazi pleasure ship was designed to hold 2,000 passengers, but in desperation set sail to flee the advancing Red army with approximately 8,000 on board. Greatly overloaded and without proper escort or enough lifeboats, Wilhelm Gustloff was an easy target for the skilled Russian submarine commander. Struck by three torpedoes from the S-13 the German vessel promptly rolled over and sank, killing nearly 7,000 German military and civilians. The loss of life from this one sinking was nearly five-times that of the British liner H.M.S. Titanic. Upon returning home, the hard-drinking Soviet submarine ace was later disgraced and banished to a labor camp. This book includes horrific accounts by German survivors. Paperback edition. 223 pages, 10 black and white photos and an index.