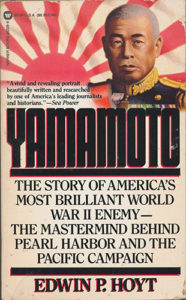 “YAMAMOTO” The Story of America’s most Brilliant World War II Enemy – The Mastermind Behind Pearl Harbor and the Pacific Campaign. By Edwin P. Hoyt. When the Japanese carrier fleet struck with savage force against Pearl Harbor (in December 1941), the credit for the attack’s success went to one man: Admiral Isoroko Yamamoto. For the next two years, as the Pacific seas churned with war, Yamamoto dueled with American commanders in a naval war, whose rules he had virtually reinvented. In this extraordinary biography, noted historian Edwin P. Hoyt chronicles Yamamoto’s rise from poverty through the ranks of the Japanese military machine, his battles with political enemies, his personal opposition to a war against the United States, and F.D.R’s never-before-revealed decision to have him assassinated in 1943. From his pioneering development of naval aviation to his aggressive use of multiple carrier fleets and night navigation, here is the true story of a 20th century samurai, a man whose forces ran wild in the Pacific–until the tide turned at Guadalcanal. 1991 Paperback edition. 357 pages, No photos, large appendix and an index.

Eagle Against The Sun