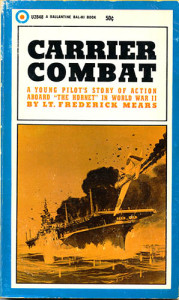 “CARRIER COMBAT” A Young Pilot’s Story of Action Aboard The Hornet in World War II. By Lieutenant Frederick Mears, USN. In the first-hand story of a young American pilot who flew with the famous Torpedo Squadron Eight from the deck of the carrier USS Hornet (CV-8) in some of the great battles of the Pacific in World War II. This is how it was to fly and fight with the U.S. Navy’s elite attack group, to strike at Japanese ships and planes in pitch battles, and to find your way back across hundreds of miles of open sea to the deck of your own carrier. Lieutenant Mears wrote this book immediately after the events he describes, and it remains the best book by any Navy pilot about the carrier war. Commissioned in October 1941, just two months before the Japanese attack on Pearl Harbor (December 1941) the Hornet had a short but legendary career. In April of 1942 she delivered sixteen B-25 bombers, under the command of Lieutenant Colonel James H. Doolittle, for the first air strike on Japan. In May of 1942, Hornet took part in the Battle of the Coral Sea. One month later the carrier was in the Battle for Midway. Her luck ran out in Battle of the Santa Cruz Islands on October 26, 1942. Hornet was attacked by a Japanese planes who dropped three bombs on the carrier; she was the last American fleet carrier to be lost in action. 1967 Paperback edition. 158 pages, no maps photos or index. Ultra rare book!

Lt. Frederick Mears wrote a diary that like others from WWII were illegal to have been written but we are lucky that he did. He chronicles from December 7th 1941 to December 7th 1942 and the events such as the Battle of Midway to the climax of the Battles of Guadalcanal. At one point Mears describes the first time he shot his weapons in combat and how he felt guilty then it was relief that he could perform in combat and that he had broken through the taboo in society on killing other humans. The reader can feel his conflicted emotions. Mears also describes the emotions of waiting for John Waldron and the majority of VT-8 to come back from their attack during the Battle of Midway only to realize that Waldron and the majority of VT-8 wasn’t coming back. The book is a quick read at 156 pages but each page is full of information that shows a junior officer’s viewpoint which is influenced by propaganda, high hopes, and exhaustion. Why this book isn’t a classic is beyond me.” – Matt

“This book is a treasure that anyone wishing to know about carrier warfare in the Pacific during WW2 must have. The author was an actual pilot & member of the well-known Torpedo Squadron 8 from the Carrier Hornet. The fact that he was a relatively green, unknown pilot to Commander Waldron, the leader of that ill-fated group, undoubtedly saved his life at the Battle of Midway. Waldron would not allow him to make the first attack with the squadron. Anyone familiar with the battle knows that the first attack was also the last attack made by Waldron’s group. His insight into Waldron and the other members of Torpedo 8 as well as his personal views on life aboard an aircraft carrier at war makes for stirring, emotional reading. I can not recommend this book highly enough to anyone wanting to read about this subject or discover some real, authentic American heroes. This book is currently out of print, so grab a copy while you still can. Unfortunately for the author, Lt. Frederick Mears, he survived Midway only to lose his life in the fighting around Guadalcanal. May their memories never be forgotten.” – G. Alvin Simons