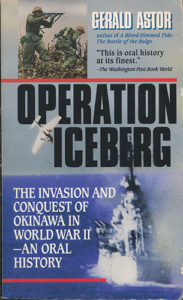 “OPERATION ICEBERG” By Gerald Astor. April, 1945, the U.S. Army and Marine Corps invaded the Japanese Island of Okinawa. With Germany’s  surrencder in May of 1945, ‘Operation Iceberg’ would be the last battle of World War II. The Japanese knew if they lost this vulnerable island, so close to  their homeland, they would be exposed to all-out attack from their enemy. The amphibious assault force was confident, but the Japanese were desperate. Their only hope was to make the Americans pay dearly for every bloody foot they gained. So the Japanese fought hard and unleashed all they had in an effort to stop the Allies. The dreaded kamikaze pilots made daily attacks on the large American fleet stationed around the island. Okinawa.The battle took place just a few months before the U.S. nuclear bombing of Japan. 1996 Paperback edition. 560 pages, 31 black and white photos. Large appendix and an index.