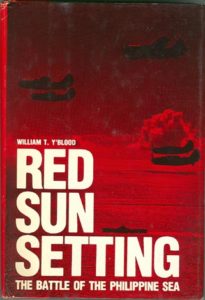 “RED SUN SETTING” The Battle of the Philippine Sea. By William T. Y’Blood. From the author of “The Little Giants” and “Hunter Killer.” Drawing on ten years of research, Y’Blood leads his reader through every stage of the historic “Battle of the Philippine Sea” in June of 1944. From the initial strategic plan that lead to the invasion of the Marianas, the “Great Marianas Turkey Shoot” and on to the recriminations that followed. Operation Forager comes alive in Red Sun Setting. 1981 Hardback (book club) edition with dust jacket. 271 pages, 25 black and white photos. Several maps, including one large detailed map inside the front and back covers. Extensive 20 page appendix and an index.