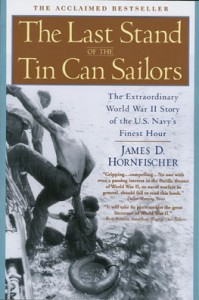 “The LAST STAND Of The TIN CAN SAILORS” The Extraordinary World War II Story of the U.S. Navy’s Finest Hour. By James D. Hornfischer. From the author of “Ship Of Ghosts.” This wonderful piece of World War II naval history reads like a particularly good novel. It is a full-account of the October 1944 naval battle off the Pacific island of Samar, in which a force of American destroyers, destroyer escorts and small escort carriers (CVE’s) successfully endured a major surface engagement with the vastly superior Japanese fleet––at least 10 times the American’s strength. The struggle was a key element of the epic Battle of Leyte Gulf, which was the beginning of the campaign to liberate the Philippines. It was also the largest naval battle of all-time. Author James Hornfischer focuses on the men of the escort carrier unit titled Taffy 3 (the radio call signal for Task Unit 77.4.3), who fought, flew, and fired to nearly the last shell in a battle that at least one commander commenced by saying, “Survival cannot be expected.” Most of the men in Taffy 3 had never seen salt water before World War II but here, bravely fought, flew, and kept the crippled ships afloat, and doomed ships fighting almost literally to the last shell. Finally, Hornfischer provides a perspective on the Japanese approach to the battle, modifying the traditional view of Japanese Admiral Kurita as a fumbler or even a coward––while exalting American sailors and pilots as they richly deserve. New Softbound edition. 499 pages, a staggering 127 black and white photos, 5 maps and 26 diagrams. A list of all American ships sunk in this battle. Also a full roster of the men listed a KIA. Extensive appendix and an index. Retail was $19.95 save $3

“Hornfischer writes of the little-known Battle off Samar, a smaller clash in the larger Battle of Leyte Gulf, in which the US Navy destroyed the Japanese Navy for good. This book personifies the notion that truth is more exciting than fiction. As Admiral “Bull” Halsey’s Third Fleet was drawn off to the north by a Japanese diversionary tactic, and as Admiral Jesse Oldendorf’s Third Fleet was destroying the main force in the Battle of Surigao Strait, Admiral Clifton Sprague’s Task Unit 77.4.3 (‘Taffy 3’) was caught completely by surprise by a vastly superior Japanese Force. In the best traditions of the Naval Service, Sprague’s destroyers and destroyer escorts pointed their bows at the enemy and engaged in repeated torpedo runs at the enemy force (even after their torpedoes were depleted), drawing fire from the cruisers and battleships, and buying time for the fleet carriers to withdraw to safety. Taking heavy casualties from the better-armored foe, Taffy 3 remained undeterred, and eventually drove the force away. In the best traditions of Naval literature, Hornfischer pens an unforgettable classic, gripping and inspiring throughout. You don’t have to be a Navy officer to appreciate this magnificent work!” – Jason Carter

“This book is extremely well written and provides in- depth information about a critical WWII battle that is often glossed over in other accounts of the war in the pacific. In addition to providing a wealth of factual information, the narrative is gripping. Even though I knew the outcome of the battle before I bought this book, I still felt that the narrative created a sense of suspense that made me want to keep on reading to find out what happens next to the men and ships who populate the story. The descriptions of the battle and its aftermath do a superior job of communicating the horrors of war. In that regard, right up there with some of the greatest works of fiction. If you want to appreciate what our veterans did for us, and what the members of our armed services are prepared to do for us today, you must read this book.” – Neal Stevens

“I’ve been an avid reader of World War II literature for 50 years. This has to rate as one of the best, if not the best of all those years. The writing is superb, but the story is unparalleled. A must read!” – Kenneth A. Slocumb