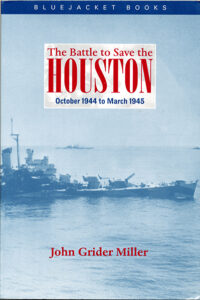 “The BATTLE To SAVE The HOUSTON” October 1944 to March 1945. By John Grider Miller. Foreword by Rear Admiral George H. Miller, USN (Ret.). The U.S. Navy lost the cruiser USS Houston (CA-30) in early 1942––sunk by the Japanese off the coast of Java. In June 1943 a new USS Houston (CL-81) was launched, and named in honor of the original warship. The  Cleveland-class cruiser quickly sailed into the Pacific-war action. On October 14, 1944 a Japanese torpedo plane scored a direct hit on Houston. Mortally wounded the vessel appeared doomed, but her brave crew fought day and night to keep Houston afloat. A sitting duck for enemy air strikes and submarine attacks the stricken ship sailed 14,000 miles from the island of Formosa to the Brooklyn Naval Yard. Here is the true story of her incredible struggle to remain afloat while Houston was never more than minutes away from sinking to the bottom. Softbound edition. 226 pages, 24 black and white photos, one diagram, no index.