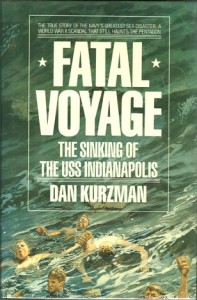 “FATAL VOYAGE” The sinking of the USS Indianapolis. By Dan Kurzman. The tragedy surrounding the sinking of the cruiser USS Indianapolis (CA-35). After completing the delivery of the first Atom Bomb to the island of Tinian in July 1945, the Indianapolis was torpedoed and sunk by the Japanese submarine I-58. By the time the crew was found, only 315 men from the original 1,200 were still alive. The loss of the Indianapolis was the worst sea disaster in American naval history! Surviving the sinking of his ship, Captain McVay was used as a scapegoat by the U.S. Navy. From award-winning author of “Left To Die.” 1990 Hardback, (book club edition). 331 pages and 26 historic black and white photographs. A large map appears inside the front and back covers. Complete USS Indianapolis crew roster and index in the back of the book.