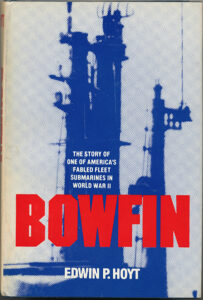 “BOWFIN” The Story of one of America’s fabled Fleet Submarines in World War II. By Edwin P. Hoyt. From the author of “Submarines At War” and “The Destroyer Killer.” Introduction by Vice Admiral Ralph W. Christie, USN (Ret.). The true story of one of America’s Fleet Submarines USS Bowfin (SS-287). During her Pacific Word War II action, Bowfin saw nine action-packed patrols and sank over 67,000 tons of Japanese ships. In the summer of 1945 Bowfin and eight other subs took part in “Operation Barney,” a top-secret patrol into the Sea of Japan. This is the book about her legendary career and the outstanding crew that brought her safely home. 1983 Hardback “Book Club” edition with dust jacket. 234 pages, 18 black and white photos, 9 maps and an index.