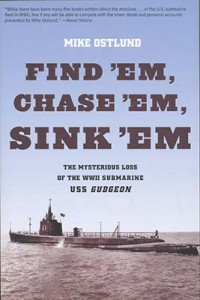 “FIND Em, CHASE Em, SINK Em” The Mysterious Loss of the WWII Submarine USS Gudgeon. By Mike Ostlund. This is the first book to recount the tragic and mysterious loss of the American World War II submarine USS Gudgeon (SS-211). Gudgeon was the first U.S. submarine to conduct offensive operations in Japanese waters. On January 27, 1942 she sank the Japanese sub I-173, the first Japanese submarine destroyed by and American sub in World War II. In April 1944, the highly decorated Gudgeon slipped beneath the waves in one of the most treacherous patrol areas in the most dangerous military service during World War II. Neither the Gudgeon nor the crew was ever seen again. Author Mike Ostlund’s “Uncle Bill” (lieutenant William C. Ostlund) was aboard the submarine. Through extensive research of patrol reports in U.S. and Japanese naval archives, interviews with veterans who had served aboard Gudgeon before its final patrol, and the personal effects of the lost men’s relatives, Ostlund has assembled the most accurate account yet of this remarkably successful submarine’s exploits, of the men aboard from steward to captain, and of what we now know about her demise. “Find ’Em, Chase ’Em, Sink ’Em” details the memories and life lessons of the young men who went to sea aboard Gudgeon before its last patrol knowing hardly anything, and coming home having seen too much. New Softbound edition. 524 pages, 85 black and white photographs, 12 maps, appendix, index and a USS Gudgeon crew roster.

“I just read the excellent “Find Em, Chase Em, Sink Em” written by Mike Ostlund. What an extraordinary, “in depth” account (no pun intended) of a very historic WW 2 submarine. I found this book to be fascinating on many levels. There are many firsthand accounts from the actual submariners detailing the patrols aboard the Gudgeon, which make it feel like you are really getting an idea of what it was like on a sub in WW2. This is the main thrust of the book, as it should be. The stories and escapades that took place and have been brought to life are fascinating.

There is also a “sub section” of the book entitled “Finding Uncle Bill” (again, no pun intended) in regards to the author’s motivation for writing the book in the first place, that being his quest to understand what happened to his long lost, and never personally known, “Uncle Bill” an officer who died on the Gudgeon’s fateful, final 12th patrol. The author, through diligent research has likely provided an answer to what the circumstances were that led to the sub’s sinking and has also likely figured out where the Gudgeon was sunk, even when other researchers failed to properly assemble the bits of information that were available.

When I compare this book with 2 other books about WW 2 submariners that I recently read, “The Bravest Men”, by William Tuohy and “No Ordinary Joes: The Extraordinary True Story of Four Submariners in World War II,” by Larry Colton, I find this book to be a much better read. My main criticism of “The Bravest Men” is that I find the book rambles and becomes very dry as the author includes too many unnecessary mundane details.

In “No Ordinary Joes” the firsthand accounts of the 4 men who were captured by the Japanese and held as prisoners of war was fascinating until the author chose to include WAY too much personal information about the men’s lives after World War 2, with no apparent purpose as to why this was included. Contrast this with “Find Em, Chase Em, Sink Em” in which the author sometimes included very subtle psychological insights into how the war was affecting the sailors while fighting it and also how it affected them after the war.

In retrospect, I think it is very ironic and also a little sad that Ostlund was able to write such a first class account of the USS Gudgeon from those who served aboard her, may have located the sub in the farthest, most difficult place to reach on the planet, but couldn’t “locate” one personal account of his Uncle’s service on that sub!” – tp

“This book tells of patrols with close personal stories as well as the usual itinerary, attacks, port calls, etc. It also has a real personal story as the author hunts for info on his long lost uncle who disappeared with the Gudgeon. lots of history, research, and lost sub hunting. highly recommended.”  – Daniel Fornataro