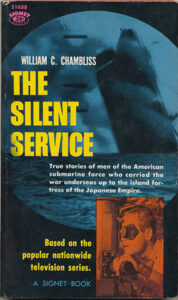 “The SILENT SERVICE” By William C. Chambliss. The author is a World War II navy veteran and was aboard the carrier USS Wasp (CV-7) when she was sunk by a Japanese submarine in 1942. This book is based on the popular television series “The Silent Service” which aired in the 1950s. Chambliss does an excellent job telling the true stories of American submariners in World War II. Six, hard-hitting chapters on the submarines; Perch (SS-176), Thresher (SS-200), Sculpin (SS-191), Harder (SS-257), Bergall (SS-320), and Seahorse (SS-304). Never published in a hardback, this is a 1959 Paperback edition. 158 pages, 7 black and white photos, 3 diagrams, a glossary but no index. Long out-of-print and becoming very difficult to find!