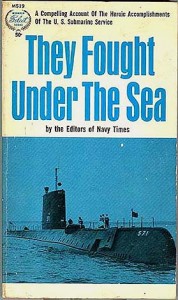 “They FOUGHT UNDER The SEA” By the editors of Navy Times. This book follows the development of the submarine as a tactical weapon, starting with America’s first sub, the Holland. Each chapter deals with a different submarine and moves further forward in time––World War I and World War II are included. German and American submarines from World War II, then on to the post-war nuclear boats. The last chapter focuses on the tragic loss of the nuclear submarine USS Thresher (SSN-593). 1963 Paperback edition. 189 pages, no photos maps or index.