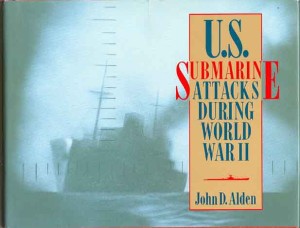 “U.S. SUBMARINE ATTACKS DURING WORLD WAR II” By John D. Alden. The most complete compilation of data ever presented on the U.S. and Allied submarine operations in the war against Japan. A monumental task that took years to complete, this book updates and greatly expands upon all previously published accounts including the official 1947 reports by the Joint Army-Navy Assessment Committee called “JANAC.” Packed full of statistical information on each and every American submarine in World War II––every attack made! This book is a must have for all World War II submarine library’s. All the information in this outstanding technical data-book was assembled by John D. Alden, a retired commander in the U.S. Navy. Alden saw action in American subs during World War II, and served 23 years in the Navy before retiring. First edition 1989 Hardback with dust jacket. 285 pages, with an appendix and an index. No photos. Note; this book only has technical data, no story line whatsoever.